If you’re in business and you’re not a fan of the show Mad Men you really should be. I suggest a good ol’ Netflix binge watch. Anyway, for the purpose of the following it doesn’t matter if you watched the show or not. 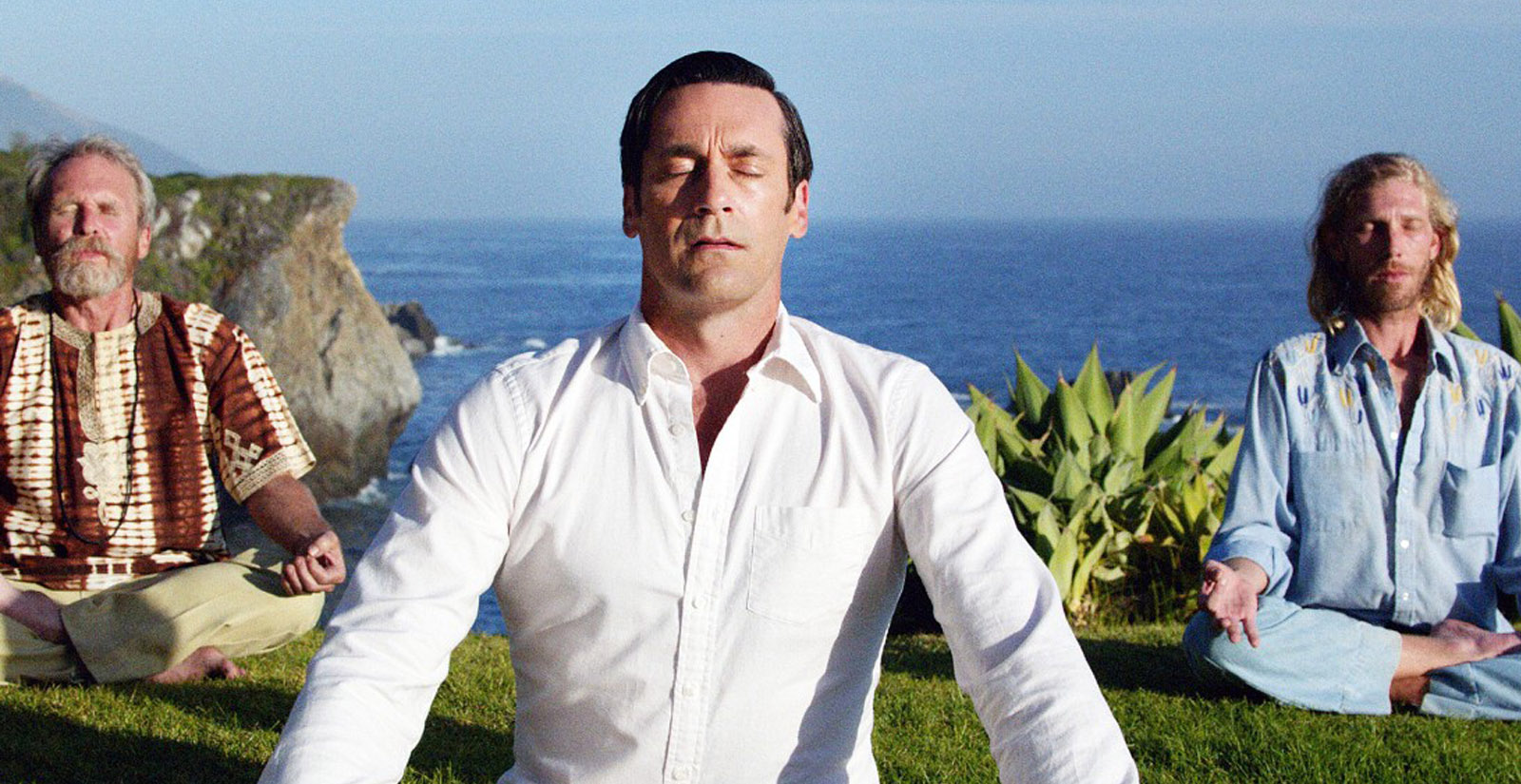 Having worked with a whole lot of people going through a whole lot of crises (both business and personal), there were some key elements of the last Mad Men episode that hit a perfect note of the struggles that bold men face. Don finally came to his “moment” sitting on a rickety wooden stool at a payphone, trapped at a personal development retreat. By the way, and as an aside, having been a facilitator in the personal development world for many years, they did a great job of subtly lampooning the entire movement with full-of-themselves facilitators asking the do-nothing question “how does that make you feel” over and over again. Classic.

Don’s “moment” gave him the exact thing he needed and yet the exact thing he had been avoiding, seemingly, all of his life. Don needed to get lost and he had been needing to get lost for the entire run of the show however, like with all great men, the act of getting lost is far too terrifying a thing to do willingly. In my work, I refer to it as stepping into the “Dark Corridor.” The Dark Corridor exists in the place between where people are in their lives and where they want to be. The truth is that we all want a little more than what we have. That’s not a bad thing, it’s the human condition to grow and develop. We want to be happier, more fulfilled, feel more loved, and achieve greater success. How do we get there? Well, that’s the bad news. Between us and all that is the Dark Corridor; a place of monumental fear and uncertainty. When we have a desire to pursue greatness in our lives, we do things like go into business for ourselves, we get married, we move to a new city or country, etc. The idea of it all seems terrific. We are filled with the burst of excitement and adrenaline that makes us feel like we’re in a 1980’s dance movie. You know it, it’s the part where the kids have just one day to practice for the big show and they all yell, “We can do it!” This leads to a montage of them gleefully practicing their cool dance moves, which takes place over a period of several hours but is compressed into just a minute or two with a snappy pop song behind it. (Don’t worry, I’ll be getting back to Don in just a second and this will all fit together when I do.) Unfortunately for us, there are no montages in life. We can’t skip the drudgery or the fear part of the experience with quick cuts, low camera angles and snappy music. Instead, we have to experience all the crap and drudgery that shows up right after our orgasmic “We can do it!” moment. Instead of the montage, we are left with the very empty feeling of, “Wait a second now. CAN I do it?”

It is in that moment that we take a step into the Dark Corridor. Here, we reach out into the darkness, fumbling, trying to find a wall to guide us through. Seemingly there are none. It’s terrifying. Nothing we have done before in our lives before has prepared us for what we are experiencing right now. There are no points of reference. We feel ill equipped to deal with the new feelings all this brings up. We stand completely alone. Everything in our being tells us to go back the way we came. We want to back out of it because this lost and empty feeling seems too hard to bear. We had no idea that doing this big thing would be so unbelievably soul crushing. So we create a mountain of reasons why we can’t continue, all very good reasons by the way, and summarily step back out the way we came. Back to the same job, the same unsatisfying (or no) relationship, the same address, the same everything. But at least we feel safe and safety becomes more important than doing that great thing we were going to do. Many people stay here, choosing to live a rather small life.

Unless we don’t do that. Unless we continue walking deeper into our Dark Corridor. Unless we make friends with unparalleled fear and uncertainty and suffer all the pain that Don Draper felt when (see, I told you we’d be back to Don) he confessed his sins to Peggy. Because in the middle of the Dark Corridor is the thing we want to see the very least. It’s a mirror. It shows us every doubt and every insecurity that we have ever had about ourselves. More than that, it shows us the one doubt that we have been hiding the most from us and everyone else. It’s the one thing from which we have been running away all of our lives. For Don, he had been using booze, women, sex, work and a total immersion into the world of advertising to avoid that one thing that he feared the most. This is what made the last episode such a perfect conclusion to the Don Draper character study. What Don saw in his mirror is the very thing that all men of greatness fear the most. “I am a fraud.”

For Don it was especially perfect because, in truth, he was a fraud. He took another man’s name, he invented a back-story for himself, he denied his past and the squalor from which he came. Don was a made up person and the last person he wanted to tell that to was himself. Yet he did. By telling Peggy Olsen, Mad Men’s moral compass, he was in fact outing himself to himself. Standing naked in the middle of the Dark Corridor, facing his mirror of truth, Don looked into the abyss of his soul. It’s a terrifying place (trust me on this one) where few men are willing to go.

Yet, without realizing it, Don set the stage for himself so beautifully to go into that dark place. He was sure that he was setting off on his cross-country journey in pursuit of some waitress. In fact, Don was stepping backwards into the corridor. Along the way he just got more and more lost, again exactly what he needed. Don got beaten up, swindled and falsely accused. He barred his soul to men  too wrapped up in their own traumas to really hear him. He got more lost when he gave away his car and reduced his life to a small bag of stuff and an ever-dwindling envelope of money. By the time he ended up at the hippy retreat, Don was fully in it. He just didn’t know it yet.

Don’s fraud declaration to Peggy was perhaps his most courageous act in the entire run of the series. While it was excessively painful for him, it was also his ultimate act of self-heeling. Looking look into that mirror, seeing the dark truth of himself and experiencing the emptiness within, there began a quieting of his soul. Don, lost and afraid, went staggering into yet another “and how does that make you feel” seminar. There he confronted his mirrored self. A nothing-man, weak and small, who thought of himself as unimportant and bereft of value in the world. Don stepped forward and embraced the man, but really he was embracing the part of himself that he had been running away from, seemingly his entire life.

Yes, Don, was a fraud in many, many places in his life. However, the one respect in which he was not a fraud was in his genius of the human condition. Don understood how to reach into people’s hearts. Ironic, but true. Don, so lost and disconnected from his own loving self, was able to reach out to the loving selves of the whole world and sell them all canned corn and hairspray. Don’s heart was, in fact, so big that selling stuff to people was the only way he could reach out emotionally and yet still be safe from forming the entanglements that cause heartbreak.

All that came crashing down for him, and thankfully so. Don’s breakdown became Don’s breakthrough. Having traversed his Dark Corridor, Don stepped tepidly out into the light of a new place. Here, he was able hold himself as a fraud and a genius in equal measures; being attached to neither one. Don experienced the freedom that all great men who have made this journey have experience. Certainly Gandhi, Dr. King, Mandela, and all the other leaders and visionaries we admire, at one point on their path, must have had the Don Draper moment. They must have all looked into their mirror and declared themselves as frauds. It is what great people do in order to get past themselves, their own wounds and buried trauma, to move forward toward the business of serving the world.

Don was now able to close his eyes in meditation and look deep within, no longer afraid of what he might find there. What did he find? Apparently, he found a desire to teach the world to sing…in perfect harmony.